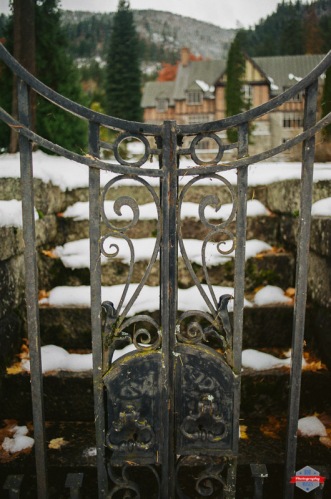 I shot these photos at Blaylock’s mansion in Nelson, British Columbia. I’ve driven by this mansion loads of times and every time I drive by I try to get a good look. It’s such an amazing looking house on the outside and I often wonder what it’s like inside. I know whoever owns the house now has made it into some kind of spa so I suppose I could go in and see, but I’m not exactly a spa kind of guy so I dunno haha. I’ll probably do it just to see because I’ve wanted to see the inside for around 10 years now.

Anyhow, about the photos. I shot these with my Minolta 800si with a AF 28mm 2.8 & 50mm 1.7. I was using Kodak Gold 200 film for these shots and I think the film lends to the scene nicely. For the house picture bellow I kind of wish I shot 2 photos because there are a lot of trees on the right side here. The reason I wanted to shoot it from this side is because the house is higher on the left side and I find houses look better if you shoot them from the lower side if there is one. If I was shooting digital I probably would have taken a look and shot another one. All good though, I’ll grab another shot next summer.

I used these photos for a video I made and I’ll add that video at the bottom of this post.