I have been shooting with my Minolta 50mm f/1.2 for a long time now. I have always known the short comings of the lens and had accepted the trade offs (like lack of sharpness wide open) for the f/1.2 speed. I have also had my Pentax 55mm f/1.8 for a long time, but haven’t shot extensively with it (mostly due to my lust for f/1.2), but I knew it to be a good lens from the times I had used it. Obviously how sharp a lens is, is always high on the priority list and I was always forced to put that aside when shooting with the Minolta. I was thinking about it and I knew I had this 55mm sitting around so I figured I might as well do some quick tests to see how these two lenses compare to one another. 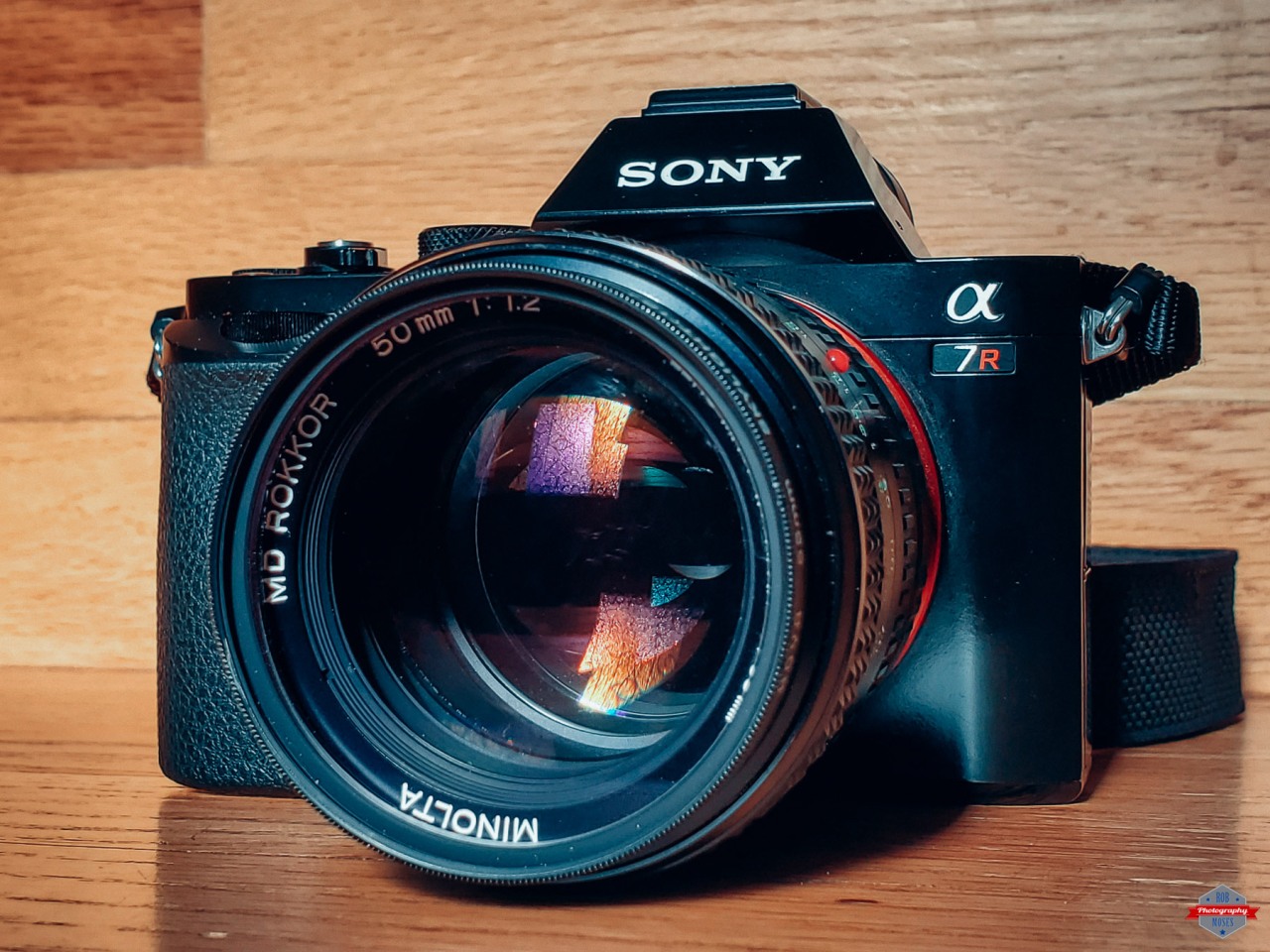 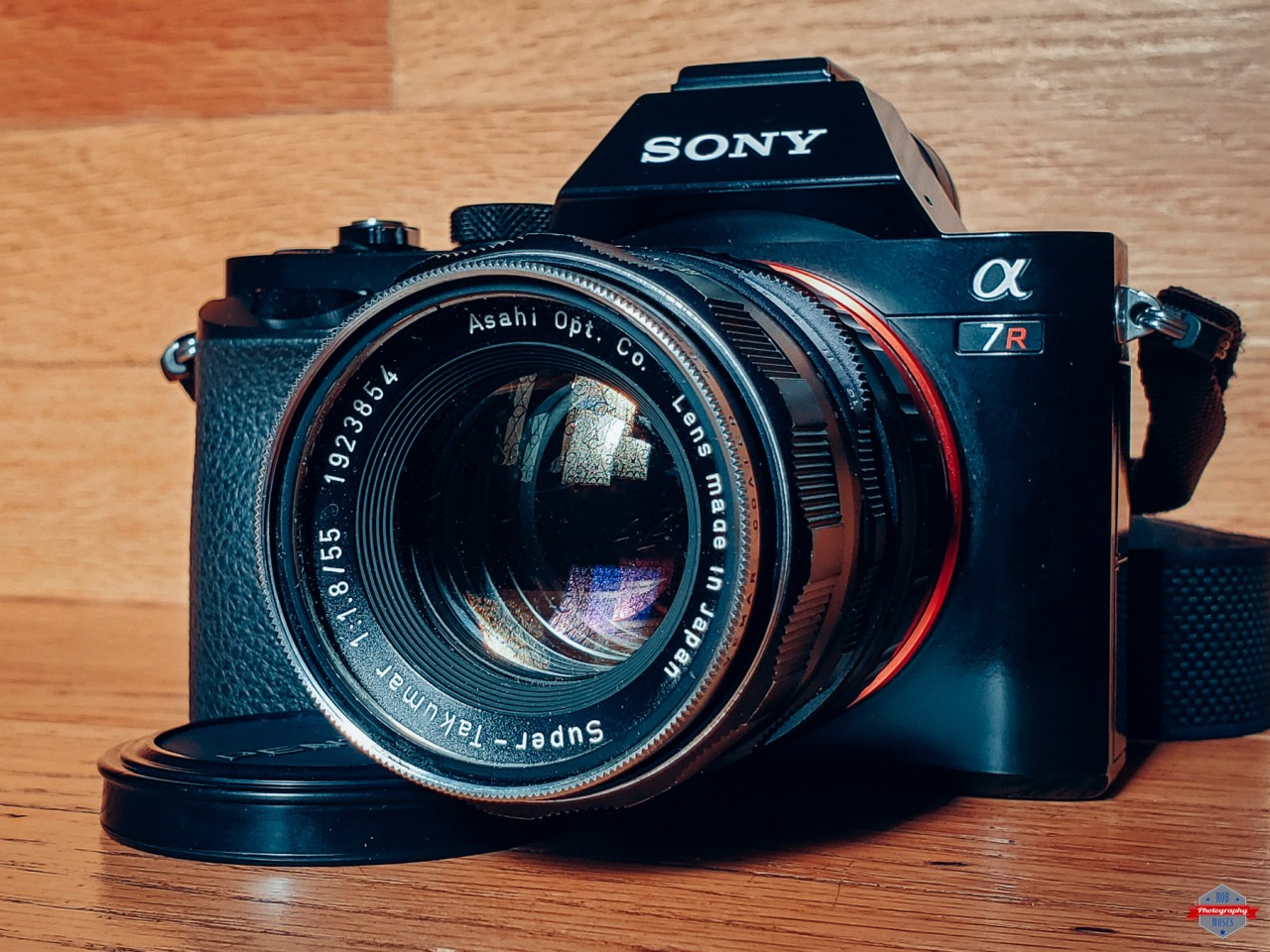 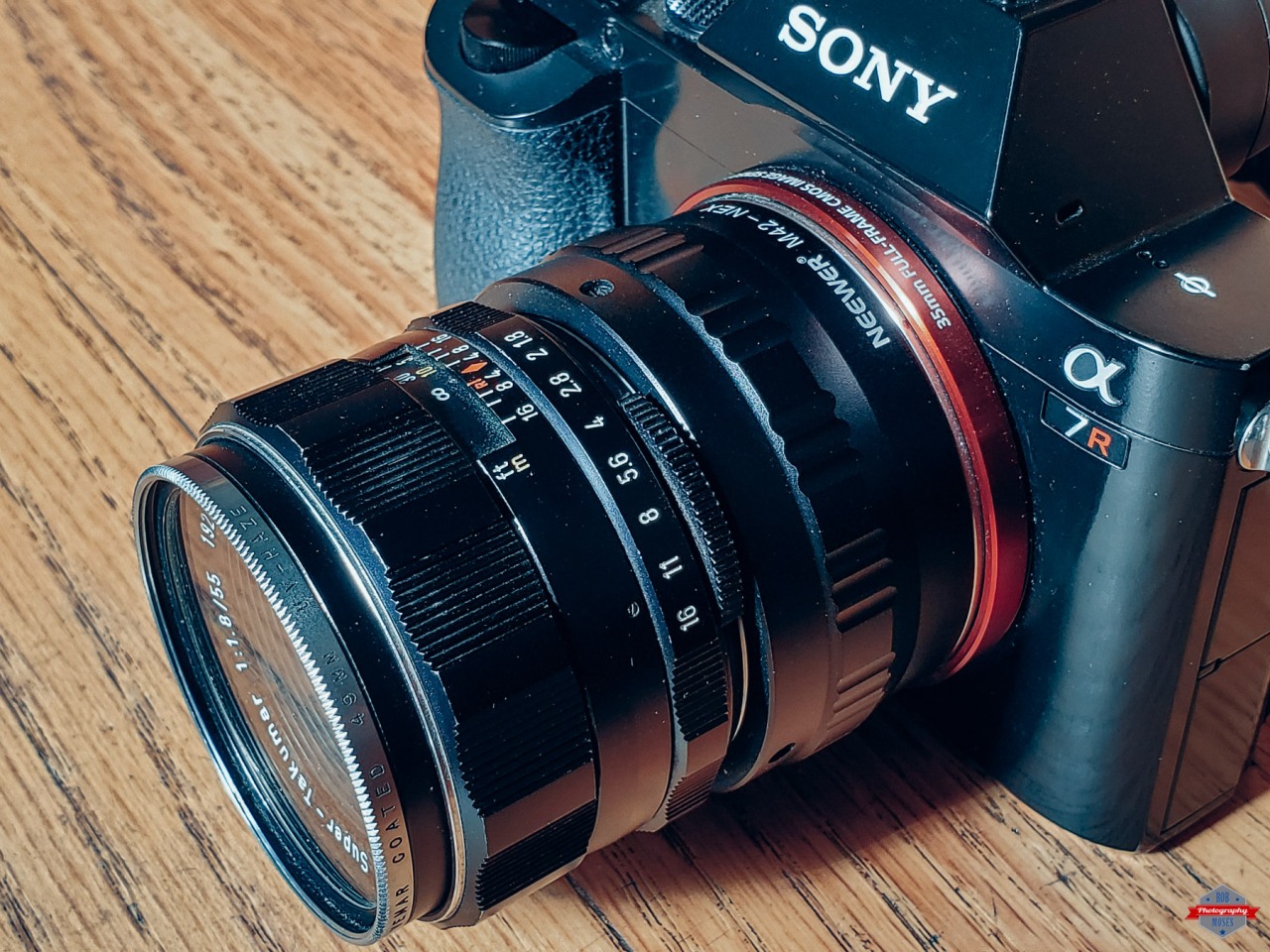 This set up was very impromptu and was put together with things that were laying within arms reach in my bedroom. The pig which is my dogs toy and a random book that my wife has been reading which was on the night stand behind me. When I starting doing these tests I was only doing them for myself and I had zero intentions of sharing my results. I just wanted to figure out if using the Minolta over the Pentax was worth the trade off in sharpness. After my 2nd set of test shots the idea to share the results popped into my head, so I figured I’d better do a couple more test shots to help people rule out the idea of user error when focusing.

So all these photos (other than the feature shot you’d see on the main page) were shot in RAW and unedited, besides brightening one way or the other. I also did a standard sharpen on export. All the following photos were shot wide open because this is where I personally wanted to see what the differences were. I take out a f1.2 lens to shoot at f1.2, so this is the setting I wanted to compare the lenses with.

Ok so the first shot was just to see what the over all differences would look like. Like I said I just grabbed whatever was near and shot my first photo with the Minolta followed by the Pentax. I focused on the pigs little blue handkerchief. In this shot I was looking at the overall look, like the 5mm difference in focal length, how sharp the subject looked at regular viewing, how the bokeh (blurry bits) compared, how much contrast or glow was going on in the image.

If I had to use one of these photos for something I’d probably choose the Pentax picture. A lot more of the pig is sharp, the raw file has more contrast and the bokeh is very, very similar to my eyes.

For these next shots I took a little more time to make sure I nailed the focus. Getting correct focus on these shots was crucial as I was planning to zoom in 100% to see how things turned out. On this shot I focused on the sentence at the top of the book that starts with “The #1 Bestseller”. Again I start with the Minolta followed by the Pentax. After the entire frame shots there are near 100% crops on the focus point (these photos are labeled).

I don’t think there is much room for debate here as it is clear the Pentax is by far and away much sharper.

For these next photos I focused on the pigs nose. To be precise I was focusing on the oval stitching of the pigs nose. Starting with the Minolta followed by the Pentax. 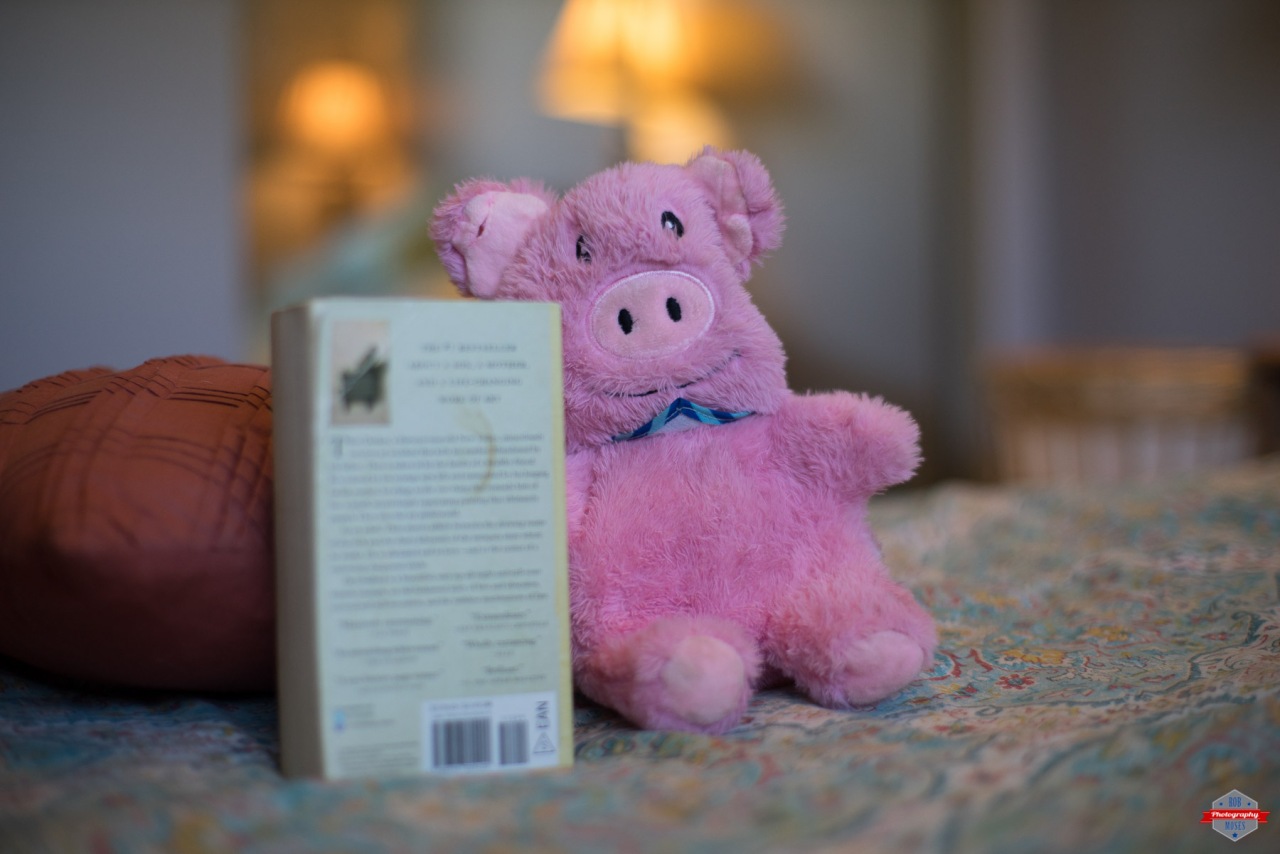 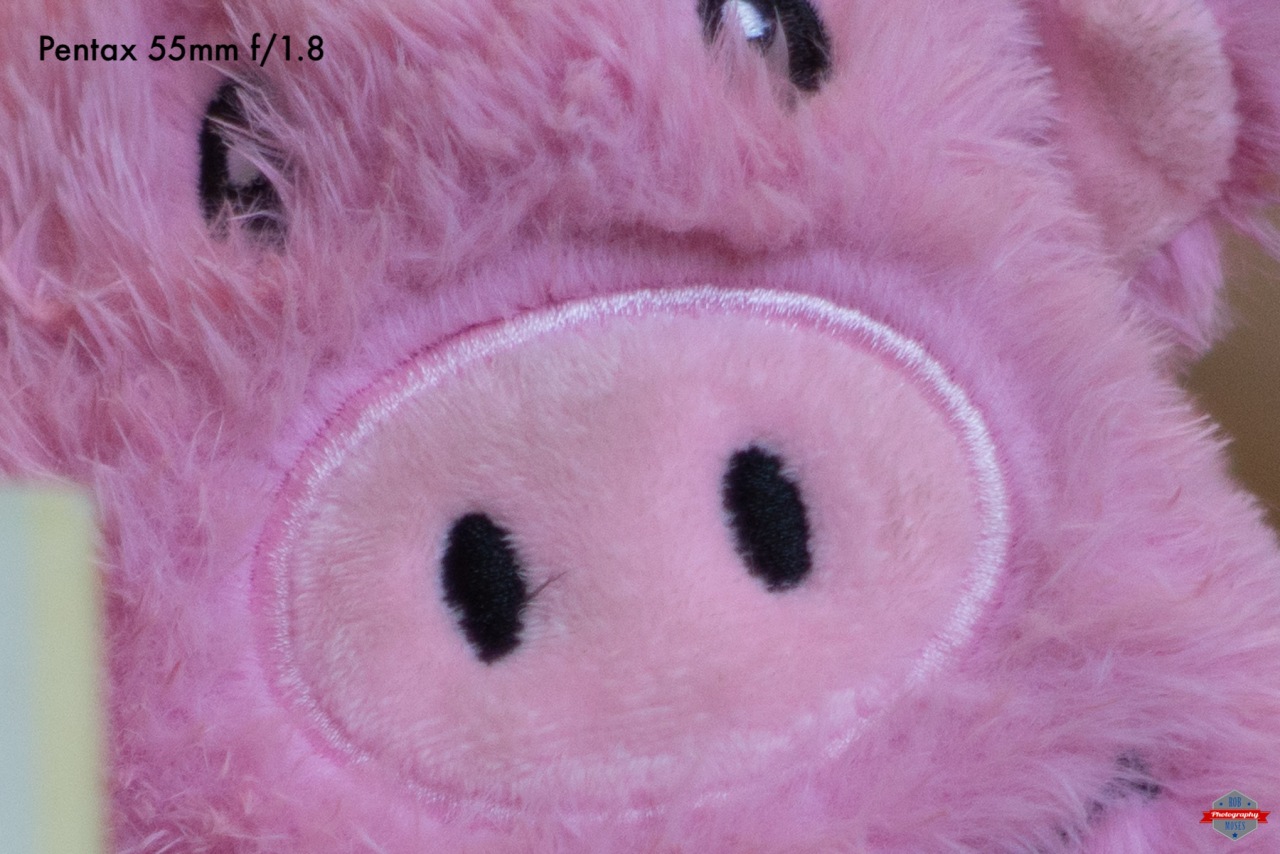 No surprise here, the Pentax wins the sharpness battle. The Minolta did fare better in this test as the pigs fur is much more forgiving than text on a book. However when you look at the zoomed in pictures side by side the Minolta in comparison to the Pentax it’s not a good look, the Pentax is just clearly much better. With that said, when your looking at the full picture both look good, but still the Pentax is better for someone with a critical eye.

With a clear winner in the sharpness and contrast area I turned my attention to the bokeh. The first four samples are from the pictures above. See following image for reference points. 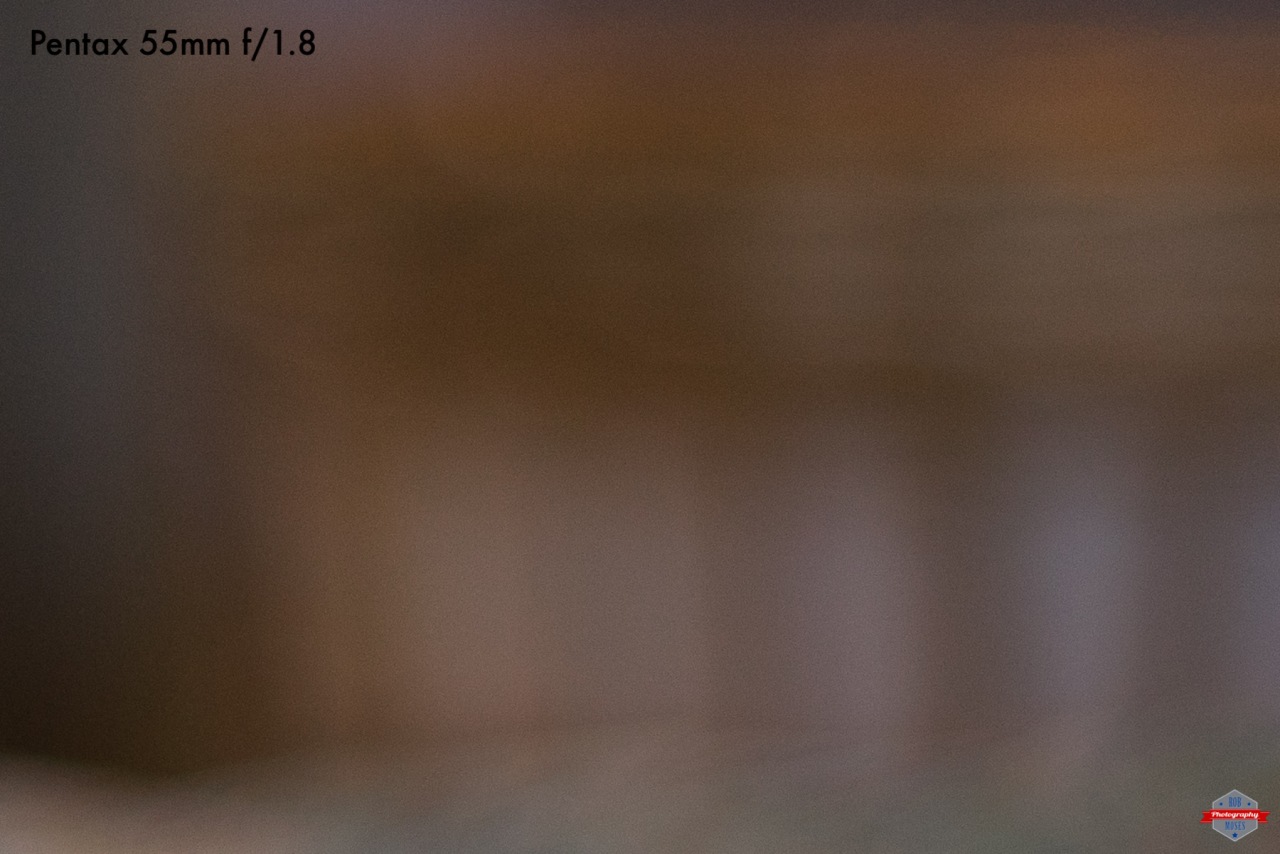 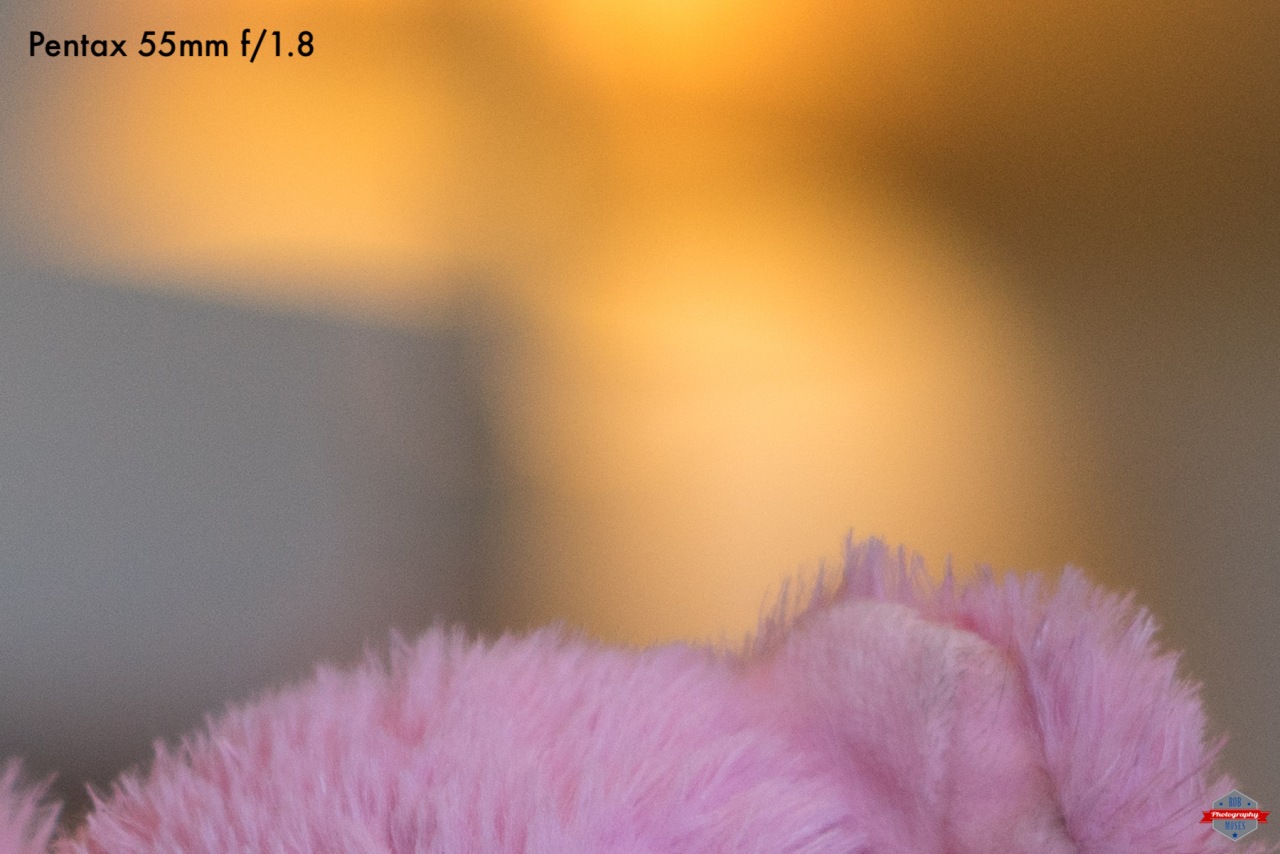 The next samples are from near the top left corner of the first image. Everyone always likes a good bokeh ball and this was the best I got from these images. The bokeh ball is actually just a bit of light shining off the (not round) handle of my dresser. 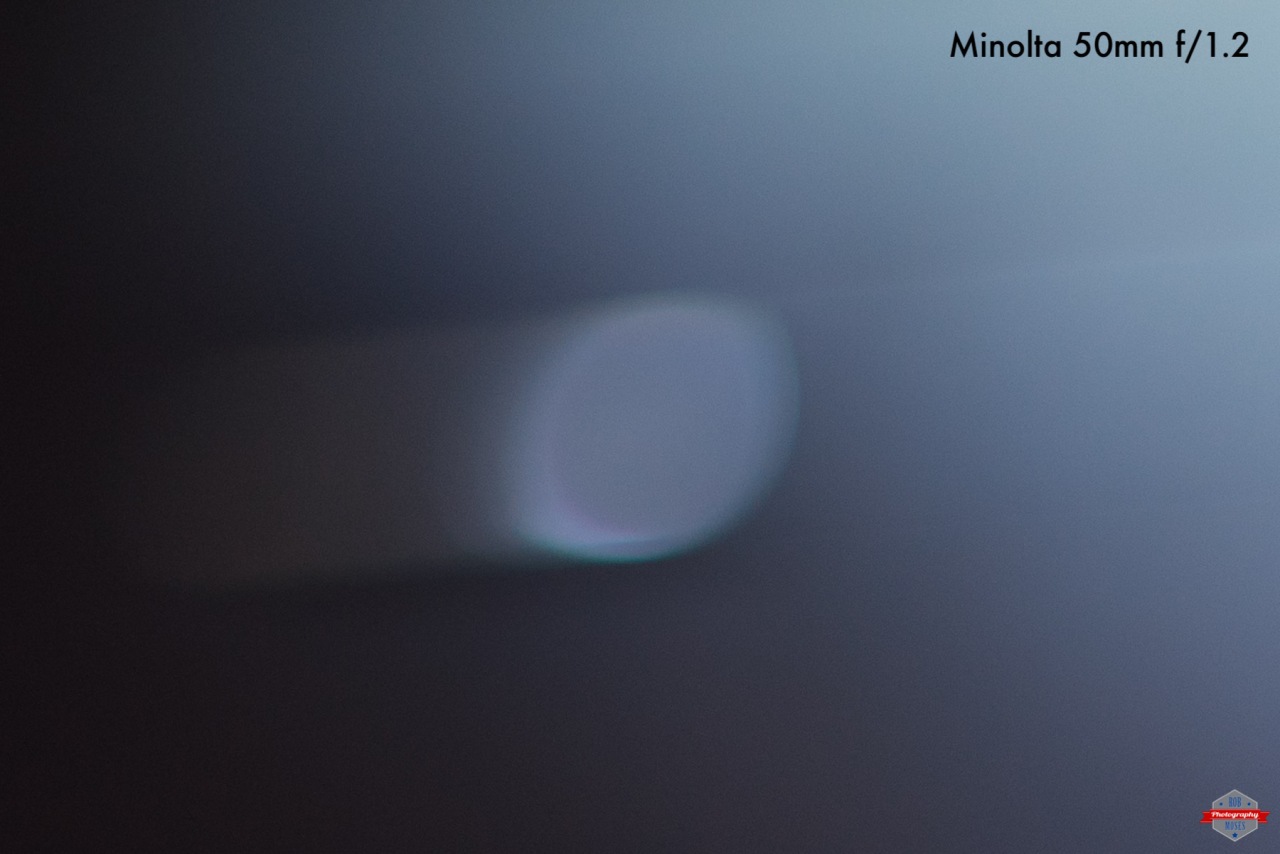 Now I know bokeh is a very subjective thing and what blurry bits look good to one person might not be for the next. But even with that as it is I think it’s pretty safe to say that the bokeh on both of these lenses is pretty damn close! This result was a little surprising to me since the Minolta is coming in at a full stop faster than the Pentax I expected the difference to be a little greater.

In all the the samples I would argue that the lens produces very similar bokeh and I don’t see a clear winner here. However when it comes to the bokeh balls I think the Pentax might have a slight edge as the Pentax ball looks a little smoother to me with less pronounced edges. But don’t get me wrong, they both look good and I’d be happy with either one. I’m just saying if there was any difference in the bokeh, that’s a minor one I can see.

I can not go any further with out addressing the speed advantage the Minolta has over the Pentax. With that blazing fast aperture of f/1.2 you can shoot your photos in lower light with lower ISO and possibly get a cleaner image. But is a little ness noise worth sacrificing sharpness and detail? And yes I understand that with higher ISO you’d need at f/1.8 you’d loose some detail there. But with how amazing the cameras are these days and the ability to get relatively clean images at ISO 3200 and beyond is f/1.2 as crucial? In my opinion, no it isn’t.

For me the test has done it’s job and I’d say the Pentax came out on top with a surprise victory. I’ll be retiring my beloved Minolta MD Rokkor 50mm f1.2 and replacing it with the underdog champion Pentax Asahi Opt. Super – Takumar 55mm f1.8 lens.

Hopefully this little test has helped you in some way. If you have any questions or you have come to a different conclusion I’d love to hear from you in the comment section.